Islam and the West

At some time in our past, when is hard to determine…we have made enemies between the west and our friends who follow a completely different religion to ourselves. In retrospect we in the western world are not entirely blameless either…there has been and still is violence towards each other…it is time we here realised that if we carry on in this vein something bad will happen. It is my fervent belief this started a long time ago in the days of Richard the Lion Heart on his crusades…it carried on of course take all these honour killings coupled with Abu Ghraib…suicide attacks, the head covering that women of the Moslem faith wear…Sharia law…I am not advocating here that it is the west’s fault it is BOTH our faults. By the same token as a child my father taught me a man’s religion is his own business; he was right come on we all know this. I did not forget the Taliban I felt sorry for those woman, here again they are a strict Islamic sect…peoples it has nothing to do with us…my folk rave on about the Saudi’s they say the punishments they dish out are inhumane…to our western minds they are; strange how it keeps breakers of the law in that country underfoot though. It is said we insulted the prophet; we probably did we do not think the same; I don’t think we will as yet…however for peace and harmony WE HAVE TO. Mistakes have been made on both sides and this has to be rectified not in a while or I’ll get around to it…it has to be done now. The atmosphere of distrust between Muslims and the West has been around for centuries. Lately, it hasn't been getting any better. For centuries Christians regarded Mohammed as a false prophet; even today few Christians would probably consider him a true prophet…well wake up as he was a prophet…in fact he is known as the seal of the prophet much the same as our own prophet Jesus of Nazareth…who by the way is treated with respect in the Islamic world Conversely, the West has left its mark on the Islamic world; not only through its politicians and generals, but also through its materialism, technologies, communication tools and organizational paradigms, things with which only hermits can completely avoid contact…sadly there are very many of those Millions of Muslim men and women live in the West and many are citizens of Western nations. They are therefore now inextricably part of the West…however this antagonism HAS TO CEASE…we all have to live on this lovely planet of ours…we must do this as a joint effort. There will always be minor altercations we would not be human otherwise…I have read of youths rioting in France…I have seen them here do much the same thing. I also read of the Grand Mufti of Australia who made insulting remarks to our women…he was fired after an investigation by an Islamic council. The business with the Israelis and Islam I admit I find hard to understand…I suspect a land rights issue but do not really know; I have read though that the Western nations possess an astonishing ignorance of the ages old Arab-Israeli conflict, and even more astounding is the absurdly naive thinking that the church has towards the religion of Islam, and its relationship to the nation of Israel…in fact Islam is the third great monotheistic religion to arise out of the common stock of Hebrew scripture. Islam though is the exact antithesis of Biblical Christianity. Each of the three great monotheistic religions views itself as the great redemptive epicentre of universal history. The following is the Jewish belief or take on this I quote "Christianity advocates love and compassion toward one's neighbour, even if he is an enemy, while Islam dictates that its pagan neighbour is an infidel who must submit to Allah, or be killed" unquote. So you see one could argue for centuries and never come to anywhere close to solving this terrible rift Most Christians probably think that Allah is merely an Arabic term for the God of the Bible, the God of Abraham, Isaac, Jacob, and Joseph…this not the case. Allah was the name of an ancient Chaldean God which was known as the Moon God. Allah was in fact the male counterpart to the female Goddess worshipped in Babylon. She was represented by the Sun. Her name was Ishtar, from which, we get our English word "Easter". As the Moon God, Allah was symbolized by the crescent shaped moon. Today, the Arabic-Islamic nations portray this very symbol on their national flags, usually in conjunction with a sword. The intent of the flag symbolism is that all nations should submit to Allah or face the sword of Allah. It may surprise Christians to know that the Koran is the most studied, most memorised, and the most respected religious book in the world today, far surpassing the public interest in the Holy Bible. This is not meant to be a lesson in religion I was just trying to point out the why’s and wherefores of this…if we do not cease to carry on like we are doing both the west and the Islamic world will in the end turn out to be quite nasty. I’m a pretty liberal thinker but we have all erred, we have to stop I’m only glad the younger Moslem's are not so disposed to this as we in the west are. WE MUST MEND THESE FENCES before it is too late
Posted by Unknown at 21:51 6 comments:

Labels: Islam and the west 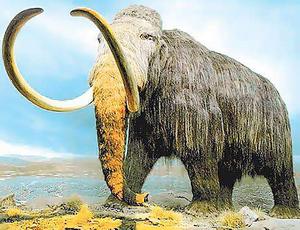 A Mammoth task indeed is it possible to re-create one from DNA well an International team thinks it possible to recreate this huge beast; the thing is why; it died out more than 10.000 Years ago, the real question facing us is do we really want Sabre toothed tigers and the like roaming the Earth once again. Still these jokers appear to be on track with this and it seems DNA was extracted from a well-preserved 27,000-year-old specimen found in the Siberian permafrost. So far, about 30 million "letters" of the genetic code have been read, albeit in small pieces, representing about 1 per cent of the entire code. Looks to me as though it will take ages anyway would these people be more gainfully employed trying to find this world of ours a better place to live in? I reckon they would. Scientists in Japan and Russia have announced plans to attempt to clone woolly mammoths with the help of the ancient animal's living relatives and, despite scepticism that they will be successful, this recent development will renew interest in the idea.Personally I think they are as nutty as the first lot. so if you see one of these Flee for your very life 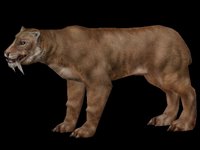 Which looks the more dangerous of the two? they both do to me and of course there were many other Prehistoric animals as well. Jurassic Park was enough I think lol...good movie but.
Posted by Unknown at 19:35 5 comments: 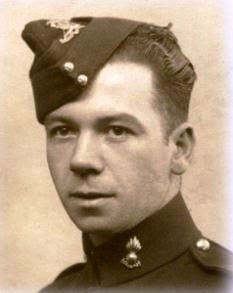 ...to wrongly blame a man and then fail to correct their error...this is done so very easily... ALL THE TIME ...look at the way they treated their ex Ghurka soldiers who were denied citizenship and the right to live in the UK...they laid their lives on the line though. So for years this poor man's family were led to believe he was a self styled cowboy showing off when in fact he was saving a child's life. No wonder their colonies decided to break completely free of this cruddy little Island...this was reported in the British Daily Mail. And to think that the truth came to light only when the mayor of the town where it happened traced the soldier's relatives to tell them a road was being named in his honour as he was considered a local hero...his family now want the Ministry of Defence to amend the bombardier's military service record to reflect his heroism...a medal for heroism wouldn't hurt either now either would it. I first read it on here along with the rest of the world otherwise it would have faded into obscurity source.
Posted by Unknown at 09:31

My solution to fix up the planet

I have noticed that every time I open a newspaper switch on the TV (radio what’s that) all I seem to read are grim reports about various wars going on...terrorists attacks bombings stuff like that. Shitty little muggers, child pornographers this list of unhuman (wait piracy) nasty crimes grows day by day...in fact if I wrote a gazillion words about it I’m sure to have missed one. Suffice to say that if at this very moment in time we were called upon by our creator to explain our lips would be zipped like a zip file. Well I have a proposal which may (probably won't) fix this problem round up all militant groups difficult yeah but worth it. Of course I include our heads of state and ALL government representatives that we like dumb idiots voted into office...in fact I suggest we start with those as they are using our cash most of our cash to be correct. This solution will cost a bit but then look at the HUGE salaries heads of state and heads of our various governments around get completely GRATIS from us mugs...ladies and gentlemen we can afford this surely. First though a brief look at the facts I’ll start with this bloke OBAMA Nobel peace prize holder (I was shocked and stunned when I read that info) then whistle on down to his cronies. Onto the Brit Government, a load of con artists I ever saw...I’m not certain about the various European Heads of state and their hangers on...probably the same as the British bloke bullshitter Brown one could never trust the French heads of state but that was in the days of Mitterrand...I know little of the other European countries...however one I have never forgot the Russian ex KGB thug Putin. In fact these types of creeps are everywhere we get them in Australia (look at that conniving liar Rudd) they need to go. Just recalled the worst of the lot, the RED Chinese government you know they killed all those students in Tiananmen Square over 20 years ago. Yeah my solution now don’t laugh I’m serious here. I guess you all recall reading about this planet that’s just been discovered...thought you had here is a video to make this interesting I know what you are thinking but you are wrong by the time we have conned our various governments into building space craft...this planet will hopefully sustain human life. So here we go oh no not us those rotten heads of government and politicians are ALL gunna go whilst we live securely once more on our own earth global warming or not. So what do you reckon a good idea yeah it is you know it we all know it all it needs is just needs a little foresight Source
Posted by Unknown at 12:30 No comments: