This features a Bridge in the state of called the Canal Hood bridge renamed of course what isn’t.

It opened on August 12 1961 and is I believe the world’s longest pontoon bridge, the floating section stretches

Renamed in 1977 after Washington’s Director of Highways to the William A Bugge Hood Canal Bridge it is not called that by the locals I have been told in fact I hate this name changing rubbish it brings to mind Cape Canaveral and LaGuardia Airport which were both renamed at least it has gone back at Cape Canaveral and Former President F Kennedy is still honoured there as the space centre is called that now, but I digress back to this Bridge which I have been told is the subject of many traffic jams (nothing new there we all get em) especially when the Bridge is opened to allow a Submarine through pictured here the USS Ohio SSBN-726

The Washington State Department of Transportation I read is a pioneer in designing and building floating bridges, and holds the record for the first and the longest floating bridges. Four of the 11 permanent floating bridges in the world are in the Puget Sound region; I wonder did they pioneer the Pontoon Bridge at operation overlord on D Day June 6 1944 Hmm oh well just a thought I reckon it was the US or Brit Sappers that did that one not to worry on with the Hood Bridge.

I did read on here that the west half of the bridge sank in 1979, the costs for replacement of the west half and rehabilitation of the east-half was $143 million. The bridge reopened in October 1982 after three years of construction; lots of cash there courtesy of the taxpayer’s no doubt!! The original cost to build it was it seems $26.6 million.

If you click here it shows the traffic this Bridge is a vital link for all residents’ commuters etc.

While I’m raving on about Bridges I might as well mention ’s most well known landmark.

The Sydney Harbour Bridge it’s the world’s largest steel arch Bridge but not the longest that honour goes to the new Lupu Bridge opened in Shanghai China a dead ringer for our old coat hanger by the look of it; those jokers would copy anything compare it here ours is the top image naturally. 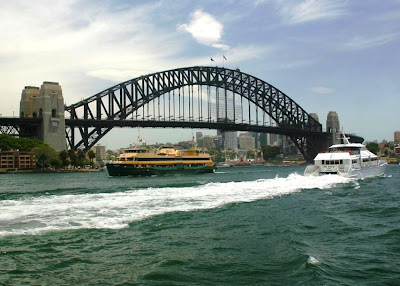 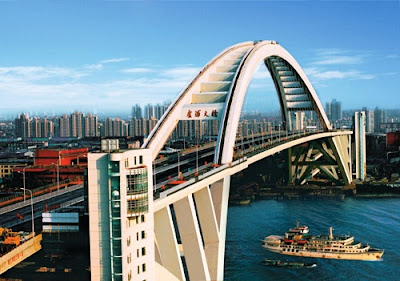 Now our coat hangar as the Sydney Harbour is affectionately called; yeah well being typically Australian the opening was unique and was done twice, in March 1932 the NSW premier of the day John Lang did not have the time or wits yeah wits would be right here the stupid Galah officially declared it open instead of cutting the special ribbon for this historic event so this other joker whom you gotta admire I reckon Captain Francis De Groot of the new guard just slashed it with his sword Bridge History.

Sadly De Groot was arrested taken to a psychiatric hospital; he was declared sane of course and why not he did get fined 5 quid but; I dunno how much in dollars with inflation but it would have been about ten bucks so nothing to write home about really.

Anyways after all this malarkey Lang officially opened an already opened bridge and after a huge pageant they actually allowed the public to walk across it what a hoot.

Costs a bloody fortune to drive over it today I know that yeah folks it’s a toll bridge and when I worked in in the 60’s the bridge was still being paid for as a Scottish mob built it I heard.

Well I’m done for the day