THE WORST SPORTING COMMENTARY IN HISTORY


Channel Nine  ACTUALLY  issue instructions about their Cricket commentary team on what to say etc. Having said that they all love the sound of their own voices, the worst offenders are HEALY, TAYLOR followed by SLATER. 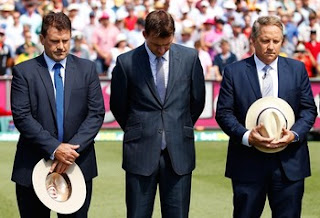 Last night’s debacle in Sydney was one of the worst I’ve ever seen in international cricket. By calling off the rain drenched match it ensured that in the event of a loss in Hobart a drawn series would ensue. The Sri Lankan Captain is looking into this further with the ICC and the ACB and I for one don’t blame him. The spirit of this game has now been  Tarnished   for ever. ONE SHOULD READ HERE
Also there is some excellent info on this link ESPN THE ASHES TEST SERIES 1932-1933
Donald Bradman, an exceptionally gifted and opening batsman was affected by these close in fielders who interfered with his concentration. The second test held in Melbourne saw Bradman dismissed by English bowler Bill Bowes for a duck (without scoring). Many Australian players were later on as the series progressed injured as a result of this unsporting tactic of Bodyline. It was not only the Australian players who were aghast at the despicable tactics of the English, but also the Australian cricket authorities (now called the ACB).Jardine was finally ordered by the  snobby mob of English cricket  to cease his dangerous tactics. The laws of the game was in the end changed to ensure that this game, now played by many countries was played within the spirit of the game. to a spectator today watching this GREAT game it looks a little like bodyline,However the players wear adequate protection now although bowlers have caused death in some instances prior to world cricket altering things read here for all info on Australian cricket.
Australian cricket He luckily managed to get it back after a few months with no apology at all in cheque form not cash after these people investigated it Newschannel5 sometimes the cop who is it on this Tennessee state scam as that's all it is asks the poor victim for a cut of the money and if they do well the policeman is in my opinion a crooked cop.
Here is a video of the incident
The cop is this case did not do that but never had a satisfactory answer he is featured below So think well before venturing into Tennessee folks

The lies of Bush and Blair

These two jokers spun a real yarn merely I reckon to give them the excuse to finish off the job President Bush senior failed to do in the first Gulf war in 1991. George his son had a reasonable excuse it happened after 9/11; He got lucky there. Of course him and his advisers had no inkling of the severe cost of human life on all sides and financial cost; it was staggering. This shows the original BBC report BBC Then the secret letter

The so called letter