A few of Whizzer's whinges

Basic human rights This is seems was signed by treaty by the US government and the Australian Government. It also it seems is being applied to David Hicks he has been charged with just one offence mark that well just the one offence of giving material support for terrorism. Such rot this type of crime was invented and made legal when Bush signed the Military Commission’s act of 2006. This is now being used against David Hicks who was captured in Afghanistan in wait for it 2001 a long time ago and bugger all to do with this act of 2006. As I read in the Melbourne Age and I agree as well doing this will violate those treaties. If David were American he could challenge this but of course he is not mind you at the same time its no good falling back on the premise that Guantanamo Bay is not America as it is technically it is a US Navy base and surely must be considered US territory like any embassy is considered. You must phone Bush NOW Howard remind him of this get in his ear about it. At this moment in time a hell of a lot of people consider David a bloke in the wrong place at the right time for the US Government maybe not then but now a lot of us do. The disgusting treatment these people who have yet to be charged is a stigma on the US Government. Oh what happened to David’s US Military lawyer by the way Bush you know Major Mori? Last I heard he was being taken to task and threatened by the US Military too many visits to Australia was one reason amongst others. Howard is only getting uppity now as he knows dam well we are sick of him and his politics if there was no election in the wind Howard would never have said all he has about the David Hicks HUGE problem. ~~~~~~~~~~~~~~~~~~~~~~~~~~~~~~~~~~~~~~~~~~~~~~~~~~~~

, Blame Each Other for 's Conflict

Nothing new here I guess how the hell Bush can blame for this is quite frankly beyond me.

At one time and were allies even after the little scrap they had and permitted Iraqi aircraft to land there in the aftermath of the 1991 effort against flouting flyover bans.

Now the government and the Iranian Government are at loggerheads again.

After further reading I suspect the belief’s of a top Iranian Clerical hit the nail on the head he believes the conference is just a cloak so the can still meddle in the region.

Yeah I have come to the same conclusion fancy that!! I bet I am not alone either.

Not a whinge but good news for a change in my opinion.

WILDLIFE officers coaxed a third whale into deeper water at , near Strahan, on 's west coast.

Parks and Wildlife ranger Chris Arthur said the whale was escorted by rescuers into deeper water this morning.

Two other whales, both males, were guided back out to the open sea yesterday.

I find it very odd why these gentle Giants do this there have been several theories as to why it occurs of course.

They certainly tolerate us I know, the snag is this Waling by the Japanese could make them wary of us but somehow I don't think so they can sense good or evil just like us I guess.

So Bush is still going to send forces to I am wondering how he’s going to get them myself.

I read troops were being recalled ah yeah that was Blair jest recalled.

I didn’t like what I read here all the same the way I read it’s going to continue; more deaths all round, our head Honcho is much the same little arrogant so and so.

The thing is these deaths civilians and US/Brit Military are horrendous.

Things must be crook in as well from this cartoon I got from a friend nah jest joking. 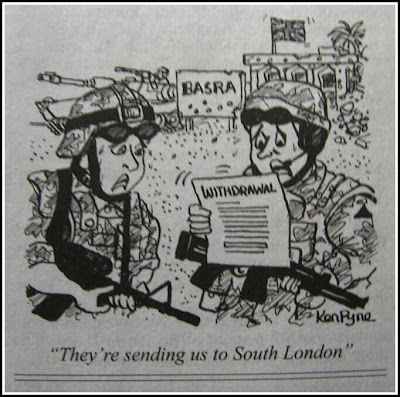 Surely its obvious by now that we were not wanted in Iraq I get all these e-mails saying support our troops I pass a few on as I like the images but in actual fact I don’t support the troops only in so far as to bring them ALL back home to their respective countries, many of whom I have not mentioned here.

On a happier note I found I had some spare cash so yesterday I went and purchased a brand new electric Frying pan with lid etc and don’t laugh a teeny fan to keep my computer monitor cool.