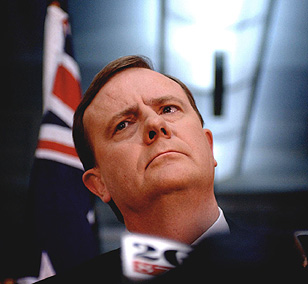 February 24, 2006 Peter Costello / Pic: John Feder . PETER Costello has called for a tougher US-style citizenship oath that demands loyalty to the Australian "compact" as he outlined his vision for a more muscular nationalism. Lambasting the spread of "mushy multiculturalism", the Treasurer has bluntly called for hard-line Muslims and others who don't observe Australian values to be stripped of their citizenship. And he said people coming to Australia should have the same respect for Australian values as visitors to a mosque who are asked to take off their shoes. And for once I agree with our Treasurer and that is a rarity; there is just one more thing he could do of course. The final touches so to speak; just DEPORT them back from whence they came. Like he said we must all become Australian citizens if we wish to live in Australia. I am just praying (at home not in a Mosque) that he never becomes Prime Minister.
Posted by Unknown at 09:27