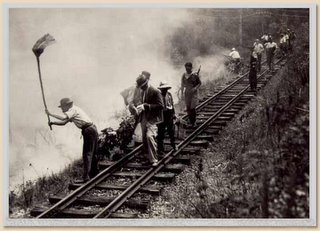 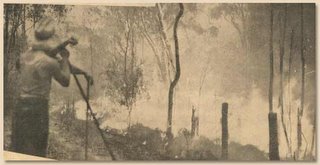 The equipment in those days for fighting Bush fires were nowhere near as sophisticated as today’s naturally It seems fire-fighters and in those days it included anyone close at hand worked all through the night as it was supposedly cooler then, and slept in the heat of the day; the fire was really going in the daytime no risk; not much could be done it seems. A feller here 24 years old at the time of the fires in Victoria said he’d been playing tennis and a forester rang up and spoilt his day Saddled up his pony he had a parcel of sandwiches down the front of his shirt, with a bottle of cold tea. And two nails in his pocket, and hooked onto his saddle was a head of a rake, because when he got to the fire, somebody would cut a handle for him out of a small tree and bingo he could nail it on. He also put a bit of bran and oats and stuff for a feed for the pony. And off he, went off to fight the 1939 fires. Rather comical when you –think about it. I saw a little fire a little while ago on the telly where there was a bulldozer, a grader, 11 tankers and helicopters, coming to fight a little scrub fire that normally would have put out with about 20 men. It seems all they had in those days were forestry workers, saw millers and Bush fire volunteers. I myself in 1994 just prior to a holiday in the USA from my Hospital bed saw the rural city of Taree NSW surrounded by fires but nowadays fire fighting volunteers come from all over even from the USA. 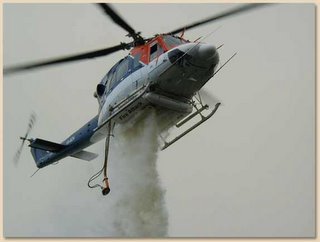 We have had worse times I know but this was Friday the 13th and so was known as black Friday. In fact there are many days associated with the name black Friday as you can see. I bet you are glad the 13th has now passed from where you all live on the globe; just as well this is a non smoking Blog I think lol
Posted by Unknown at 19:42